This walk starts at Christ Church, Govilon, and guides you around the heart of the village on roads with and without pavements and the canal towpath. It is the shortest of the village trails but makes up for this in the number of interesting sites. The route takes about 45 minutes and involves some steeper climbs and one set of steps which need care. A few diversions are highlighted off the route to explore other village treasures.

Christ Church Car Park has a small number of car spaces and can be busy. Immediately adjacent to the parking area is Christ Church which dates from 1860. Before its construction villagers crossed the River Usk to worship at St. Peter's church at Llanwenarth Citra. Initially a bridge spanned the river but this was replaced by a winched ferry. The river crossing was not without risk and so in 1848 building work start on a small Chapel of Ease. This was enlarged into a Parish Church in 1860. Five years later the Parish of Llanwenarth Ultra was created for the Govilon area.

The Reverend George Grove was the first Rector. He was also responsible for the construction of the Old Rectory, the Church Hall, the school in Pwlldu, and the extension of the National School. 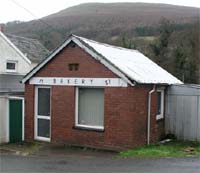 The Lych gate was erected in 1974 in memory of a much-lived village school master Ivor Tossell. Directly opposite the gate was the site of the village bakery. Austin Nash was the village baker until 1965. At Christmas villagers brought their cakes to him to bake. The Bakery was demolished in 2005.

Walking down the road you will pass Hope House on your right. This was built in 1650. At one time it was owned by Crawshay Bailey, the famous Iron Works Owner and was used as the residence of the manager of the Nantyglo Ironworks. The coach house and stables are still standing. The cottage next to Hope House was originally a cobbler's shop, and like the other adjacent workmen's cottages (known as the Old Cottages) was built in the 18th Century.

On your left was once The Three Cocks Inn, dating back to at least 1845. At one time the village reputedly had 13 public houses. Today there are just two in the village: On the right hand side is the Bridge End Inn which dates from 1786, and the Lion Hotel which dates from Georgian times operate. The Three Cocks Inn became the Govilon Tea Rooms until 1929 and is now a private house.

Behind and above the Bridge End Inn was the site of the Ty'r Factori Woollen Mill.

Walk on down towards the main road and listen to the Cwm Shenkin Brook as it drops over a weir as it tumbles through the village. At the main road is the Old Blacksmiths. Bill Matthews, the Blacksmith is still remembered at work here. Until the 1930's five men were employed in the shoeing of horses and making iron rims for cartwheels made by the local wheelwright. The original blacksmith's was by the aqueduct near Christchurch and was operating as early as 1790.

At the junction choose to divert from the route either to visit the War Memorial along the main road (left) or explore Mill Lane. Both detours return to this spot to allow you to rejoin the Red Route.

The unique War Memorial is a short walk along the main road. Immediately on your right you pass a large stone built residence, known as the Old Rectory. This was financed by the Reverend George Grove, the first rector of Govilon, in 1867. Continue along the road until you reach the War Memorial. This is built of sandstone from a local quarry. Although originally situated in the centre of the village it was moved to its current location in 1937. It now provides an impressive entrance to the King George V Recreation Ground at the western entrance of the village. The Memorial in Govilon is unusual in that it commemorates a civilian casualty – May Prosser. It is believed she was killed in a local munitions factory. Return via the same route to the Old Blacksmith's to resume the Red Route.

The Second diversion is a short stroll down Mill Lane opposite the Old Blacksmiths. A Corn Mill has stood here since at least 1790. It was a working Mill until 1956 and is now a private house. Some of the old stone mill wheels can be found decorating the building. There are a number of cottages that squeeze between the Cwm Shenkin brook and the lane as both wind there way towards the River Usk. In the 1960's Mill Lane was cut in two with the building of the Head of the Valleys Road (A465). Care is needed in crossing the road if you want to continue down Mill Lane towards the River Usk. At the River you will find Ferry Cottage. A building has existed on this spot since 1706, and derives its name from the six passenger wooden boat which the ferry owner pulled across by rope wound manually from beside the Cottage. The ferry closed in 1955.

To return to the red route retrace your route back up Mill Lane. 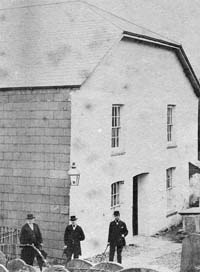 From the Blacksmiths walk up the main road past the Post Office and the Village Stores. Turn right and continue up Station Road. On your left you will find Llanwenarth Baptist Chapel, the oldest Baptist Chapel in Wales. The fellowship has met since 1652, with this chapel built in 1695 and enlarges in the 1800's.

Next along station road you will find the Chapel Cottages which date from 1700's. The Chapel caretaker lived in the cottage nearest the Chapel, attached to which was a stable for sheltering horses of folk attending services.

At the canal you will see a small cottage on your left. This was originally a small shop built in 1932. At first it sold sweets and tobacco but more recently was the village butchers from 1965 to 1999. At the canal foot bridge the route links with the Purple Trail to explore the upper part of the village and to access the Green Trail.

To continue the Red Trail turn right and follow the towpath on the canal bank. Continue on the towpath as it clings to the hillside above Govilon past where rowing boats were once for hire. Just beyond this an aqueduct crosses the Cwm Shenkin Brook and opposite you will see the remains of the Old Dry Dock behind which two cottages once stood.

Looking up the valley there are a number of springs which emerge from the left hand slopes. One of these is a Holy well dedicated to St Patrick and was the main water supply to the village for many years. In the 1960's Water Carnivals were held with a Boat Procession and with games such as a greasy pole across the Dock and a tug-o-war right across the canal.

Carrying a little further along the canal towpath you return to the Aqueduct above Christ Church. This was built in 1803 and provides delightful views on either side. Descend the steps on your right – take care as the steps are steep and narrow – to the road above Christ Church where the Red Trail begins and ends.